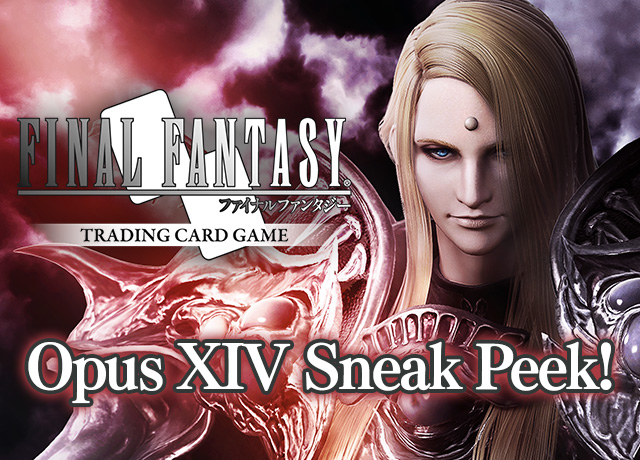 FINAL FANTASY TRADING CARD GAME, abbreviated FFTCG, is played all around the world.
We’re excited to bring you an FF Portal-exclusive sneak peek of four cards from the newest FFTCG set, Opus XIV: Crystal Abyss, which will be released on August 6th!

Once again, we bring you new card introductions from FFTCG producer Taro Kageyama and comments on their art from the illustrators who drew them!

Hello, everyone. FFTCG producer Taro Kageyama here. As always, we’ve been introducing new cards on the portal site before their release. The latest set, Opus XIV: Crystal Abyss, will come out on August 6th, and this time we have four new cards to show off featuring illustrations made exclusively for FFTCG, two each from Messrs. Ryoma Ito and Yasuhisa Izumisawa. I hope you’ll stick with us to the very end.

First up from Mr. Ito are a pair of Viera sisters who appear in FINAL FANTASY XII, Mjrn [14-053R] and Jote [14-054R]. This is both their first appearance in FFTCG. Siblings to the player character Fran, Mjrn is the youngest sister and Jote is the eldest. During the game, Vaan and company meet Fran’s sisters in the Viera settlement of Eruyt Village. They both have an important role in the story, but I will leave it to you to play and see for yourself.

In FFTCG, all three sisters including Fran have connected abilities. First Mjrn [14-053R] is able to activate Card Name Fran and Card Name Jote. Fran and Jote both have Backup cards, which means if you control them, Mjrn can enter the field at zero cost. Additionally, because her card is able to Break a Forward of cost 5 or greater, you may find her quite useful late in the game.

When Jote [14-054R] enters the field, you’re able to search for either Card Name Fran or Card Name Mjrn to add one of them to your hand. Being able to search for Mjrn [14-053R] as a Backup is exceedingly convenient, and searching for Fran as a Forward would be just fine as well. Having an EX Burst attached is a nice bonus, too. I imagine these three sisters will want to go in any deck as a set.

【Comment from Illustrator Ryoma Ito】
Among the characters I designed for FFXII, I’m especially fond of Jote and Mjrn. A bit before the FFTCG order for these characters came in, I had handled an illustration introducing the remaster of FINAL FANTASY XII THE ZODIAC AGE on its Instagram account, and the motif of that illustration was these three sisters. I heard from the producer of FFXII THE ZODIAC AGE that the illustration was well received, so I remember I was thrilled to have the chance to draw them again. “Did Mr. Taro [Producer Kageyama] see that picture…?” I wondered.
The flavor of the illustration came about from a provocative request from the person in charge of FFTCG. He wanted something primarily monochrome but with an accent color in just the eyes, similar to an illustration I had done for an FFTCG tournament. It’s really tough to get the balance right with ultra-minimal color information, and unlike before, now we were working remotely, so of all the jobs I’ve been given, these have to be the illustrations that took the longest with the most do-overs. My pillow was wet with tears every night. For that reason alone, I’m deeply attached to these pieces. I can’t wish enough that everyone will make the most of them in their decks.

Mr. Izumisawa illustrated for us two espers from WORLD OF FINAL FANTASY [hereafter WOFF]. Out of all the espers that appear in WOFF, we asked not for your famous ones like Ifrit and Shiva who are already a common sight in FFTCG, but for these two, because we wanted to make some summon cards with a unique personality. Both cards came out as planned, with truly distinct and charming visuals. As I mentioned, there are a variety of espers in WOFF, so I hope we’ll have the chance to bring in some others in the future.

Now then, let’s take a look at how these cards were designed. First up is Ifrita [14-002R], a Summon specializing in fire damage. In addition to that, though, she boasts a rare effect. Get this: you can search your deck for any Card Name Ifrita. The effect goes by Card Name, so that means you’re able to hold Ifrita [9-002H] as well. On top of that, if you use her EX Burst, you can deal damage while increasing your hand. How’s that for a super summon?

Our other card, Shivalry [14-029R], has a discard effect typical for Summmon cards, but unusual for ice types. You can choose one Forward, increase its power by 3,000, and then it grants an ability such that when a Forward your opponent controls is moved from the field into the Break Zone on the same turn that it was dealt damage by your chosen Forward, your opponent must discard one card. It’s a bit of a tricky ability, but in simple terms, its most general use might be that you can use it when your Forward is blocked to beat the blocking Forward. A good time to use it might be paired with a Forward with a damage-dealing ability like Physalis [13-028L]. Also, simply adding 3,000 power to your Forward can protect it from removal by damage-type abilities.

【Comment from Illustrator Yasuhisa Izumisawa】
Ifrita is always scowling in the game, so I made her smile this time.
I designed Shivalry after the look of a live-action [tokusatsu] superhero, which surprisingly doesn’t really show up in the FF series. His card is based on his special attack pose.
Both characters are favorites of mine, so I look forward to the day they reappear by joining FFTCG.